Fundanas: A FUN Way to Show Your Sea Turtle Support

What exactly is a Fundana? Lisa Jo Randgaard, a longtime Sea Turtle Conservancy member, passed away unexpectedly in May 2012, at age 43, due to complications from a serious congenital heart condition. To honor Lisa’s passion for wildlife and its protection, especially her love of sea turtles, the Randgaard family established The Lisa Jo Randgaard Fund, making it STC’s first member-initiated endowment fund. 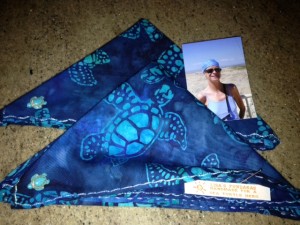 In March 2013, Lisa’s family launched Lisa’s Fundanas Project. Her mother and two sisters are hand-sewing special, limited edition bandanas using batik cotton fabric featuring a beautiful sea turtle print. Each bandana is approximately 21”x 21” and comes with a special label reading “Handmade for a Sea Turtle Hero” and a turquoise sea turtle bead. Custom, pet-sized Fundanas without beads are also available, and can be embroidered with your pet’s name.

We did a special Q&A with Lisa’s sister, Linda, about Lisa’s Fundanas Project:

How did the idea for Lisa’s Fundanas Project come about?

My Mom, sister and I – “The Sew Turtles” – wanted the chance to direct our grief and do good in the world since helping those most vulnerable, especially animals, was a central theme in Lisa’s life.  Lisa saw bandanas as a wardrobe staple, she loved adventures of all shapes and sizes, and she had a particular passion for endangered sea turtles, strengthened through her involvement with STC.  Lisa’s Fundanas Project was a fun-loving way to combine these aspects of Lisa’s life and raise funds for The Lisa Jo Randgaard Fund.  We are very proud that it is STC’s first member-initiated endowment fund.  A sales goal of 50 Fundanas was set in order to raise $1,000 for Lisa’s Fund, and things have gone further than we ever imagined possible.  To our great delight, we have sold 243 and raised $6,810 since last February.

What is your favorite way to wear your Fundana?

I like to wear mine on my head or around my neck while I hike for sun protection, but don’t underestimate a Fundana’s value at darkening a room or tent when used to cover your eyes.  Ironically, while I don’t travel much, I’ve become more adventure-minded since we launched this effort because I want to share in the fun.  My husband and I just posted our picture from the oldest living forest on earth, with ancient trees dating 3,000 to 5,000 years old.  Last spring, I went for my first hot air balloon ride.  I don’t think these trips would have happened if not for the spirit of the Project, and I know Lisa would be thrilled at what is being done in her name. 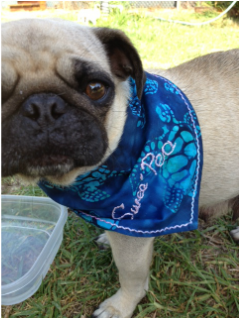 What kind of pictures do you receive of people wearing/traveling with their Fundanas?

Our “Say Cheese” section on the LoveIntoSustainedAction.com website and the Love Into Sustained Action Facebook page have grown into something quite wonderful.  Fundana pictures have come in from “Coast-to-Coast and the Middle”; they’ve also come from as far away as Italy, Iceland, and Afghanistan.  We even had a photo taken at the equator in Kenya, Africa.  We set a goal of 17 U.S. states and 17 foreign countries represented in our website’s photo album since that is Lisa’s birthdate.  We’re well on our way to meeting and, hopefully, surpassing these goals with 11 states and 13 countries currently represented.  Some people snap shots at home or on local adventures, while others are hitting the road and taking their Fundanas with them.  We love every single one, and each submission is entered automatically into our photo contest that runs through March 2014.

What is the process of making a Fundana like?

It’s emotional, but gratifying, because we’ve seen the Project go so much further than we ever expected.   I, personally, stand at my kitchen island and stitch because otherwise my cats and dogs want to help.  Sewing each one reminds us that there are many big-hearted, generous people in the world who share of our love of sea turtles and their ongoing protection.  Equally important to us, so many Fundana Fans have shared pictures and infused that sense of playfulness into our work, which has been heartwarming.

Why do Fundanas make a great holiday gift?

People have responded warmly and generously to the fact that this Project is so personal in nature and that 100% of each donation is directed to sea turtle conservation, honoring our beloved daughter and sister.  Every Fundana is one-of-a-kind and hand-sewn by Mom in Minnesota, Diane in Oregon, or me in California.  The batiked 100% cotton sea turtle fabric, special label and sea turtle bead seem to be a big hit with folks.  We just mailed our single largest order of 25, now on their way to the Cayman Islands.  It really is a gift that keeps on giving because endowment funding underpins sea turtle conservation in perpetuity.

What are you future goals for Fundana sales / Lisa’s Fund?

The Project runs through March 2014, and we hope to see sales continue until we pack up our sewing needles.  In addition to Lisa’s Fundanas, we’ve made a couple “Fancy Fundanas” for the holidays with unique beading that are available to view and order online for $40-$50 donations.  As for our next project?  Stay tuned.

Who would you love to see rock a Fundana?

The minimum donation for each Limited Edition Lisa’s Fundana is $20 (also $20 for a pet Fundana) and 100% of all money raised is donated to STC for The Lisa Jo Randgaard Fund. To celebrate Lisa’s love of travel, the family is asking all Fundanas fans to share pictures of themselves and pets wearing their Fundanas on both local and global adventures. Pictures can be added to the growing album at LoveIntoSustainedAction.com and Love Into Sustained Action on Facebook.

Posted in General, Get Involved|